Scour outlets and weir gates of man-made reservoirs are used to regulate water levels and thus in many cases serve as flood defences, supply drinking water and process water, or are used to generate power. If the control system for these gates should fail, the communities downstream would be at risk of serious flooding. Holger Ebel, Senior Product Specialist at Stromag, uses examples of applications to explain how limit switches from the drive technology experts ensure the operation of these gates.

Use case: Baldeneysee in Essen (Ruhr)

With a storage volume of 7.6 million m3, Baldeneysee south of Essen is the largest of six reservoirs in the Ruhr and a popular local recreational area in the densely populated region. The inflow of a run-of-river power plant which generates 26.7 million kWh of environmentally-friendly power on average is regulated by the three roller gates in the weir of the reservoir, each of which is 33.5 m wide. During the course of the comprehensive refurbishment of the gates and drives that started in 2007, numerous functions have been automated and safety components have been replaced with new ones such as Stromag limit switches.

Before the modernisation measures were carried out, a person had to monitor the water level indicator on site and operate the machinery for opening the gates manually. The drive for each of the three outlets consists of an electric motor and an exposed spur gear unit, the output shaft for which operates the weir roller by means of a chain. The operating switch-off points were realised by means of two redundantly designed outdated limit switches from another supplier.

Stromag supplied the new geared cam limit switches with mounted encoder in the form of a multiturn absolute encoder. For the necessary safety redundancy, each limit switch is equipped with two separate contact chambers containing built-in switching elements with different characteristics. The positive opening double NC contacts in the first contact chamber were designed especially for safety-related applications in accordance with DIN EN ISO 13849-1. The switching elements installed in the second contact chamber are equipped with a positive opening NC contact and a galvanically separated NO contact, enabling the switching state to be monitored too. The whole gear limit switch is designed with positive locking – from the drive shaft to the cam discs – while the metal gear is lubricated for life. The absolute encoder also adds another safety element as it ensures that the positional data is available without re-referencing, even after a power failure.

The encoder data are processed in a safety-oriented controller (safety PLC) and the limit switch realises the corresponding operating and emergency end positions. “It is also possible to carry out a plausibility check in order to identify any malfunctions in good time. However, during the period of almost twelve years since installation was completed, everything has worked perfectly”, enthuses Ebel. Since then, the whole installation has been monitored and controlled both efficiently and centrally from the barrage control centre in Essen.

“The Kœnigsmacker barrage in France is even bigger, and with a large body of water like the Mosel or the Rhine, we had to take things one step further”, says Ebel, describing the second application of Stromag limit switches. The Kœnigsmacker barrage was constructed in 1964 when the Mosel was expanded to become a major navigational waterway. The roller gate here is equipped with a chain drive and controls the water level in order to maintain the target barrage level of 148.9 m above mean sea level.

The unit developed by Stromag consists of a main current limit switch with built-in auxiliary current contacts, another special limit switch mounted at the non-drive end, the angular gear and a high-end absolute encoder specially developed for hydraulic steelwork. The rotary movement of the shaft from the gate drive is divided between the drive shaft of the absolute encoder and the shaft of the Stromag main current limit switch by an angular gear. During normal operation, the smaller auxiliary current contacts shut off the motor via a contactor if the gate is raised or lowered. “Should these fail, or the contactor get stuck, we still have 6 main current contacts in two groups of three here which directly interrupt the motor’s three-phase current supply at up to 200 A for each direction of rotation and all poles”, explains Ebel.

Another important safety element within the installation in Kœnigsmacker is the so-called “dead man’s circuit”. For this, additional contacts in the special limit switch mounted at the non-drive end switch off the drive over the entire lifting height of the gate at regular intervals so that any further stage of opening must be confirmed manually. In the process, the absolute encoder continuously detects the position of the weir gate with great precision over the entire height. 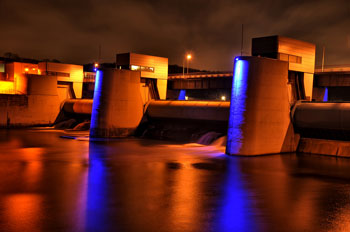 Scour outlets and weir gates of man-made reservoirs are used to regulate water levels and thus in many cases serve as flood defences, supply drinking water and process water, or are used to generate power.

Holger Ebel is able to cite numerous other examples of applications for limit switch solutions provided by Stromag for use in hydraulic steelwork – on the Rhine, for example. Stromag is also currently working on a solution for equalizing water levels using the small canal locks in Amsterdam. In this case, the limit switch with auxiliary current contacts operates the geared motors of the spindle drive for the lock gates. “The whole system is monitored by a SIL3 absolute encoder, i.e. ‘performance level e’”, says Ebel. “If you then add an incremental encoder to the motor, you can import values to the control system and perform comparisons. By doing this, you can monitor the gear unit to make sure that it is working properly, for example.”

While not a hydraulic engineering application, the system that controls the rotary movement of the world’s largest reflecting telescope is particularly interesting. Located in Namibia, the H.E.S.S. (High Energy Stereoscopic System) is used to study cosmic gamma rays. The control system prevents the 614 m² mirror surface from being damaged by long periods of direct exposure to solar radiation. “We developed a special gear unit with absolutely no backlash for this application because of the high level of operating precision that the mechanism requires”, explains Ebel.

While Stromag’s portfolio also includes a wide range of mass-produced limit switches for cranes, stage technology, thermal power plants, etc., the limit switch solutions for hydraulic steelwork described are highly specialised projects carried out on behalf of customers where the special precision and adjustability of these components come into their own. The expertise required for such projects is guaranteed by the company’s in-house application engineers and the decades of experience that Stromag has gained.