Modern vessels are equipped with dozens of ancillary items, such as winches and load-ing cranes, which must all incorporate braking systems to ensure their operation is reliable and effectively controlled

To meet the evolving demands of marine operators, engineers at Stromag started from a clean sheet

Modern vessels are equipped with dozens of ancillary items, such as winches and loading cranes, which must all incorporate braking systems to ensure their operation is reliable and effectively controlled.

Stromag, part of Altra Industrial Motion Corp, has designed and manufactured marine braking systems for decades, and the company’s products are installed on vessels operating across the globe. That experience has given Stromag unparalleled insight into the demands placed on equipment that operates at sea, and of the evolving needs of vessel owners.

“In marine applications, time is money,” explains Michael Frank, Product Specialist, Clutches and Brakes at Stromag. “The faster vessels can complete loading and unloading operations, the sooner they can be on their way, earning their keep.” That pressure for increased productivity, he adds, has led to a continual increase in the capacity and speed of ancillary equipment.

That, in turn, has significant implications for braking systems. “As cranes and hoists run faster and move larger loads, the amount of kinetic energy in the system increases, and the braking system needs to be able to manage that energy to keep the equipment under control.”

Over time, Stromag engineers have continually adapted and upgraded their existing range of marine brakes to handle increased loads, but the company recognized that these incremental improvements were reaching their limit. It was time for a new approach.

The company established a team to create an entirely new series of brakes, designed to meet the requirements of current and future generations of fast, high-powered marine equipment. “Our objectives for the new range were simple,” says Michael Frank. “Our customers wanted a solution that offered the same high levels of reliability they have come to expect from Stromag, but with more available power. Of course, they also have a close eye on cost.”

Delivering against those objectives was more challenging, however. Braking systems for marine equipment face a number of significant constraints. They have to fit into a limited space envelope, offer standard mechanical and electrical interfaces for shafts and control systems, and withstand all the rigors of the wet, corrosive marine environment.

“The key to better brake performance is improved thermal characteristics,” explains Michael Frank. “It is the braking system’s ability to dissipate heat that determines the power available.” The thermal behaviour of a braking system is a complex design process, determined by the interaction between multiple components. To get the performance it was looking for, the Stromag team had to apply its in-depth experience of advanced friction system design, to make extensive use of computer-aided simulation and optimisation tools, and to test multiple prototypes on rigs and in the field. 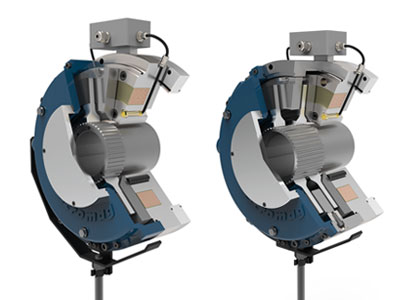 The HPB series is available in two-face or four-face configurations and with a brake torque range of 80 to 5,000 Nm

The outcome of all that work, says Michael Frank, is the most highly optimised friction package the company has ever produced for a dry electromagnetic brake. For customers, that means a significant step-change in performance. The improvement can be seen most clearly in the speed ratings of the brakes in the new High Performance Brake (HPB) range.

But what about the cost issue? Michael Frank points out that the new design also provides significant benefits here. “The higher power rating of the new brakes mean that customers can often select a unit one or two frame sizes smaller for a given application, with corresponding cost savings,” he says. In addition, every part of the new braking system is designed to be simple, robust and easy to assemble.

The overall part count has been reduced, for example by replacing separate covers with a part integrated into the body of the brake. The HPB series also uses a modular design that shares components between different models, to simplify the manufacturing supply chain.

Those changes don’t just mean lower production costs, they also help to streamline maintenance and support activities. In addition, the internal components of the range are all designed to resist corrosion and offer enhanced durability under exposure to salt water or other contaminants.

The HPB series is available in two-face or four-face configurations and with a brake torque range of 80 to 5,000 Nm. While the new range of brakes was inspired by the demands of marine customers, the range is also suitable for use in industrial environments where long-term reliability and resistance to harsh environments are a priority.