Stromag was selected to provide advanced braking solutions for use aboard the U.S. Navy’s newest Gerald Ford-class nuclear-powered aircraft carriers.

The Ford-class carriers utilize three large aircraft elevators, each weighing more than 100 tons, to move aircraft up and down from the hangar bay to the flight deck. The Stromag brakes are incorporated into the motor/gearbox-driven lift systems located on all four corners of each aircraft elevator.

The Stromag brakes were subjected to a battery of tests including cycle tests and emergency stop tests where the brakes were required to hold more than 200,000 lbs. A series of explosive, high G-force shock tests, designed to simulate anti-ship mines, were also performed. The brakes were able to stay energized and run through several operational cycles between each successive blast. The Stromag brakes survived and performed perfectly beyond the number of required explosive events.

Based on the outstanding test results, Stomag NFA brakes have been approved for use on all U.S. Navy aircraft elevator systems including those installed on America-class Amphibious Assault Ships. 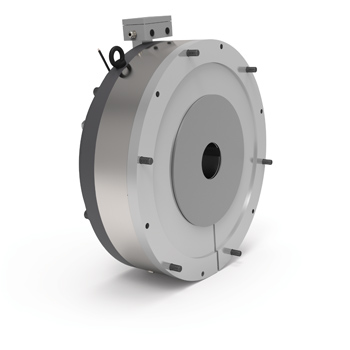