Stromag was chosen to supply accurate braking systems for the three-stage ship lift at the Goupitan Dam in China. The 763 ft. (232.5 m) high dam is located on the busy Wujiang River, a tributary of the Yangtze River. The dam utilizes five turbines that can generate up to 3,000 MW of power.

A series of three separate ship lifts were constructed to accommodate the large amount of boat traffic on the river. A single lift is positioned on the upper side of the dam to raise and lower vessels while two lifts are installed in series on the lower side of the dam.

Each of the three lifts has a maximum weight capacity of 1,800 tonnes. With a hoisting speed of approximately 8 m/min., the powerful lifts can raise a 500 tonne vessel to a maximum height of 79 meters in 10 minutes.

The three lifting systems each consist of two rows of massive synchronized hoist cable drums and large gearboxes positioned over both sides of the boat-lifting reservoir. Stromag supplied SH32 hydraulic caliper brakes for the project. Multiple brakes are pedestal-mounted on either side of the large diameter hoist drum brake discs. The Model SH32 brakes have a dynamic braking force up to 334 kN. 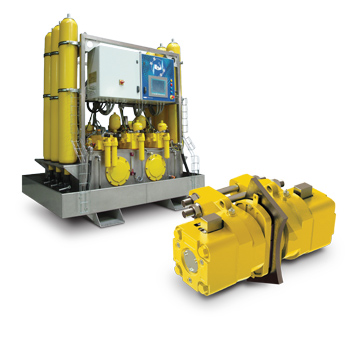